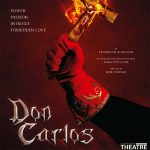 Nobody expects the Spanish Inquisition, according to Monty Python, nor would passersby expect how vibrantly the genteel Goodwood Institute’s stage has been transformed into the royal court of 16th Century Spain by Independent Theatre.

The company’s season of Don Carlos, opened Friday night and in its inimitable style, few stones have been left unturned in the staging of this production.

Rob Croser and David Roach have paired the density of the script with deceptively simple sets, props, and costumes atop a dramatically raked stage. Three large, tall doors across the back of the set perform various functions, from that of providing simple access to becoming symbols of prison and/or excess of religious power. Bold columns left and right define the stage area while also allowing for actors to slip on and off stage from various vantage points. They heighten the sense of leakage in the royal court; spies and whispers can pass easily through such porous walls.

There is a weight and texture to the costumes that conveys the lavishness of the court, with material kept plain and bold while being adorned by custom made medals to depict rank and role. Of particular note are the costumes for Queen Elisabeth (striking flourish without encumbering the actor and becoming the centre of attention) and the Cardinal Grand Inquisitor (that red, that red).

But what of the play?

Mike Poulton’s “streamlined” translation of Friedrich Schiller’s Don Carlos balances the language conventions of a royal household with contemporary parlance, ensuring the script is readily accessible to the modern ear, albeit with some verbal flourish.

The story is set Spain in 1567-68, as King Philip II’s son, Don Carlos, is lamenting how the woman he loves, his former fiancee, had become married to his father. The marriage was part of a political arrangement to bring peace between Elisabeth’s France and Philip’s Spain. But although this marriage might have led to geopolitical peace, and have been resigned to by Elisabeth, it stoked profound despair and violence within the heart of Don Carlos. This young prince is driven to find a way to communicate with his beloved and win back her heart; a dangerous course for both of them.

Meanwhile, Don Carlos’s friend, Rodrigo, Marquis of Posa, enters the royal court with a mission of preventing the austere and violent King from subjecting the people of Flanders to the heavy hand of the Inquisition to stamp out the “heresy” of Protestantism. Through a stroke of fate, Rodrigo becomes confidant to the king and begins to enact a complex plan for meeting his needs in Flanders while helping to elevate Don Carlos as the next king.

Independent Theatre has found a very good cast for this production. Ben Francis as Don Carlos has an intriguing physical presence, not unlike that of the original Don Carlos himself. Although the incessant lamenting of his character makes it difficult to empathise with him at first, as he confronts his father later in Act I, we see are drawn into his lot and we adopt him as one of our heroes. Madeleine Herd masterfully captures the fragility of the Queen’s position. We understand her entrapment and our hearts reach out to her. Stuart Pearce carries his role of King Phillip II with good poise. He is given a number of melodramatic moments which threaten to undermine his status as powerful ruler, but Pearce holds on and continues his reign as monarch in our imaginations. Perhaps the strongest performance of this production is that of Will Cox as Rodrigo. Cox’s command of presence is a joy to yield to. Even in his delicate moments as supplicant to the king in which he actively tries to diminish himself, he is our beacon of hope. Admittedly, Rodrigo’s character is Friedrich Schiller’s mouthpiece, admonishing the corruption of the day and calling us to higher, more noble values, but even without that playwright-endowed advantage, Will Cox brings an energy and poise to the stage that is a joy to behold.

This is a dense story and even Schiller was aware of this in the late 1700s. It was originally five hours long and the playwright was not expecting the play to have much of a future. He did craft some shorter versions but Independent Theatre has adopted the modified translation by Mike Poulton, which is half the length of the original. Even so, this is still a very long play by conventional standards and one wonders whether a heavy hand might still trim heartily from the script without diminishing the story. It might also leave a little extra breathing space for the Cardinal Grand Inquisitor, who’s brief appearance at the end seems heavily redacted. As an audience, we leave wanting some less and a little more.

Don Carlos is a polished production that is at once a rollick through the Royal Court of Spain, a forlorn tale of romance, and also an earnest exploration of political and religious philosophies. To not see this play would be an act of heresy, itself!