Does It Please You? – The Final Saga Does It Please You? - The Final Saga 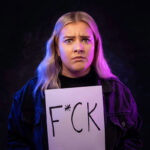 Does It Please You? – The Final Saga charts the continuum of human experience from “I’m so sorry” to “f*ck you”.

It is an hour of vignettes, ranging from dance to soliloquy to comedy to song, and then back again.

Written, directed, performed, and produced by Taylor Nobes, the core of this production, based on true life stories of the case, is the internal core within all of us that is burning and raging as a result of absorbing all the judgements, rejections, and moments of qualified approval of others that we at once yearn for and loathe. This energy needs to go somewhere. Sometimes that results in an eruption of noise and physicality or even just quiet despair.

The resulting show is like an embodied Rorschach inkblot test. With unrelenting pace and well-oiled transitions, we are exposed to scene after scene, creating an atmosphere of curiosity; how will we react, how with the performers react?

Oft times, there is a sense that we’re being played with, toyed with, and Nobes is responsible for this heightened state because she has an enthralling ability to hold us in her gaze, lull us into a moment of poignant truth and then cavalierly dismiss our earnestness with a sneer or a wink. There is no solid ground, only flux. And perhaps this is the DNA of the production; we are all in flux, being forged by the torment and tenderness of others and ourselves.

Nobes has endearing stage presence and shows great range, from the grotesque observational comedy of her misogynistic producer character to her powerful and poignant role as singer.

Sam Lau is also a shining light in this production, captivating us as the uber-deprecating musician fumbling through an audition to his explosive outpouring of self-doubt, humility, and range while being pushed and provoked by Nobes’ “sleaze guy”.

Does It Please You? – The Final Saga is richer for the dance sequences led by Hanna Instrell-Walker and Kate Burgess. This duo works well together, performing choreography that is both fluid and tight (even gravity-defying). Mikayla Rudd completes the dance ensemble, amid various roles throughout the show.

Amid the high calibre of this production, the only weak link for some audience members would be the overuse of “f*ck”. It’s a word without much weight these days, but when it is spent cheaply, it becomes even more diminished. It would be fascinating to see this final saga stretched a little further and enhanced with some dense, sharp dialogue and f*ck substitutes. We know this writer and this ensemble would be capable of such extra depth.

Does It Please You? – The Final Saga is a high-energy expression of the modern psyche. It is confronting in parts, breathtaking in others, and always richly entertaining.