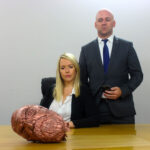 Demagogue is a play Australian audiences need to see now.

It is a smart, witty, philosophically-brutal romp through a myriad of ideas and challenges ultimately related to power; our thirst for it and our fear of it.

What makes this play by Safari Street Creative timely is its dissection of protest culture, something that has taken on a new life during this era of the Covid-19 pandemic and its precursor; the selfish, bullying, nihilistic time of Trump and the media culture that let him thrive.

How do we get to such towering issues?

This one hour of dramatic power is set in a university Dean’s office, where a modern “power couple”, Chris (Spencer Scholz) and Kate (Samantha Riley), having been summoned to discuss their daughter’s punishment for an act of petty vandalism on school property. However, all is not as it seems because the consequences of the daughter’s grotesque act of vandalism-cum-activism has potential to destroy her parents’ political lives; Chris’ role as a high up political figure in a sitting government and Kate’s marketing/PR work for the government and other clients.

From the opening seconds, we are confronted by rich, thoughtful, and funny dialogue delivered at a withering pace, like watching the best debates of West Wing powered by Hollywood-dosed quantities of cocaine.

There are many gems flung between the characters, from personal barbs to Machiavellian-styled “truth bombs”.

Intriguingly, despite the taut and narratively-sound storyline, we do get to glimpse at many angles of our current age of social media-fuelled revolt.

Chris’ sharing of a Dostoevksy’s observation that even if humankind were to achieve utopia, people would still start agitating and squabbling, just to have some activity to be engaged in, seems to mirror the playing out of Covid-19 protests. Once the popular perception of threat had dissipated, pockets of “heroes” arose to be brave; science be damned.

Equally, the political character also throws barbs at the Murdoch press, after a journalist calls for comment after details of their daughter’s situation have been leaked. When Kate hatches a plan to work with the journalist to seize the initiative, Chris retorts that she has more faith in Newscorp than I do. I am curious to see if this reference makes it into the review in The Advertiser!

But grounding this in realism is a feat that Scholz has achieved in his writing, exemplified in the sharp observation that comments are not votes. Such clarity about the real and the phony, the substance and the charade, grounds this work and earns its right to be taken seriously. Very seriously. Even while laughing.

Scholz and Riley perform solidly with Scholz having a strong start due to his chair facing the audience a little more than Riley’s, perhaps deliberately. Thus, his character towers in the opening half of the play before hers arises and she finds her stride. There is colour and light, loudness and quiet, and this two-hander conjures a satisfying sense of despair and brooding. Simple, powerful, enjoyable theatre. And hopefully it will fuel after-show discussions and, in a moment of great optimism on behalf of this writer, give pause for thought as audience members consume the modern press and begin determining their casting of votes at the fast-approaching election.