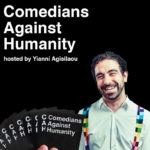 Based on the hit card game, Cards Against Humanity, where players fill in random sentences with typically non-PC answers my curiosity was piqued as to how this play out with a live audience.

As we lined up we were given three cards, the potential answers and prompts for the comedians.

Basically an improv show with three random comedians each night, in this case Clair Cavanagh, Steve Bennett and Damien Warren-Smith did their best at pretty random prompts.

Set along various types of games we went into the first with a Press Conference theme, and the “headmaster” of a local private school defending some rather suggestive actions by its students.

As the audience your job is to provide suitable endings to various statements with the best setting up the next small section.

Much political incorrectness ensued to great amusement with a hint of schadenfreude (we did miss out on any “Germany” themed cards though) as the comics tried making the best of an increasing number of disturbing responses.

After the Press Conference we moved onto a game of Interrogation with confusion running riot amongst claims of illegitimate love children and aliens.

Movie posters titles and the comedians providing the tag lines was good fun which also worked out well.

Elevator pitches for TV shows gave all three some snappy lines with the titles arising from audience cards.

Overall it was a great show, suitably politically incorrect and was over way too soon.