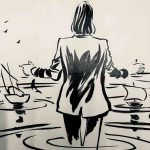 “Come Sail Your Ships” – A Nick Cave and the Bad Seeds Tribute is indeed a show that is born of gratitude to Nick Cave, pays him great respect, and pulses with admiration.

The Ukulele Death Squad has curated an interesting set of Nick Cave songs that showcases the depth of Cave’s catalogue and shines a spotlight on the elemental integrity of his compositions.

From starting with the barest of elements – ukes, keys, bass drum, and voice – the UDS builds layers of emotion and sound that fills the room and the senses and threatened to lift the Grace Emily Hotel off its foundations during People Ain’t No Good.

Having lost Julian to a WOMADelaide accident, the band called upon Matt Barker to fill out the ensemble and he almost stole the show. His wildly mesmerising stage presence and vocals weaved their way through the thicket of strumming and drumming and added that elusive character of unpredictability that Cave has mastered through his bands’ various manifestations.

Ash Randell must also get a mention. Her singing and hypnotic stage presence gave the show a finesse, especially when she took the reins on Where The Wild Roses Grow. The stunning arrangement and her vocals with Matt, OWNED that song. It was held aloft, higher than the rock referenced in the latter part of the lyrics, filled with power and the bliss of creative triumph.

In fact, all the songs covered by UDS were superb with the only one that went slightly adrift being The Ship Song, most likely due to all the last minute improvisations and relief of opening night. It will be back on course for the rest of the Sold Out run and even its slight deviation cannot detract from the mastery of the guys behind Ukulele Death Squad. This team should be required listening for anybody interested in live music in South Australia, Australia, or the world. Long may they sail.