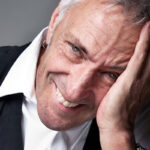 WARNING: What follows is a review by a monolingual anglophile of a concert of songs sung in French. Tu as été prévenu!

Born in Belgium, the late Jacques Brel became a remarkable “French” chansonnier (singer/songwriter) and his haunting, passionate, almost visceral songs have been brought to life by an English-born Australian performer, John Waters.

Waters has scaled back this show from its 2010 Adelaide Cabaret Festival production, halving the 6-piece band to a trio, consisting of Stewart D’Arrietta on piano, Michael Kluger on accordion, and bass player Tony Mitchell, thus enabling a sense of one man baring his emotions in a raw and intimate outpouring. (He explains why he changed the band set up in this interview: John Waters presents the Chansons de Jacques Brel this Adelaide Fringe).

Waters amplifies the contrast between the modest staging and the flamboyant swagger of these potent songs, by remaining almost static throughout the show, albeit for moments when the passion erupts. In these heated moments, Waters’ arms flail, his fists are clenched, and his head often is thrown back so he can beseech the heavens to indulge these channelled cries from the heart for one more time.

But there’s a journey for those with no French. Waters caters for us with intriguing explanations before each song, sometimes historical and sometimes a simple rendering of the song’s content and context. Armed with this guidance, the initial experience is one of elaborate gibberish akin to listening to fine Shakespeare from another room; we can appreciate the cadence and feel the engagement of the audience. But then, something transforms. With the demand of trying to hear and comprehend the lyrics lifted, we can derive nourishment from the rich and ornate arrangements and the deft, masterful sojourning of voice, melody, and passion.

Indeed, Waters ironically and thankfully brings raindrops of insight and understanding from a monolingual country where it never rains.

The blossoming of new awareness bursts brilliantly with THAT song; Ne me quitte pas (Don’t leave me). Our previously satisfactory versions by the likes of Rod McKuen (If You Go Away) – more admirably performed by Neil Diamond – are suddenly and totally blanched and rendered insipid by the heat and despair of Brel’s original intent and phrasing.

From this moment on, Waters is Brel in full flight and audience members of all linguistic capabilities are hereon carried as one. Notable highlights include Amsterdam and the reflectively-pleading, J’Arrive, in which Brel despairs at the gradual arriving of death, taking friends from him, and leaving him to declare that what he’d really have liked was just one more time to visit the river once more, drag his bones towards the sunlight, and even take a lover.

There is something rare, beautiful, and elusive about the songs of Jacques Brel and similar singer-songwriters like Leonard Cohen. Their voices are unique, they don’t conform, and thus become an acquired taste that attracts the forlorn, the lost, the hopeful, the broken, the resilient, the most unaffectedly human. As an aside, the voices of both men were given flight by a female singer who could see and feel their rich treasure; for Brel it was Juliette Gréco singing Le diable (Ça va), for Cohen it was Judy Collins singing Suzanne.

But for us, at the Adelaide Fringe, we have John Waters singing Jacques Brel, and keeping a candle burning for those writers of honest songs, to whom our hearts owe a great debt.