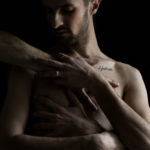 All the ramifications of sexual assault by a close friend are laid bare in Brodie John’s searing one-person show set in a theatre dressing room after a drag-show performance.

A talented young actor who never skips a beat, Brodie exposes his scars, self-doubt and self-blame as he changes from drag to streetwear, exposing his nakedness and true self in a moving and harrowing soliloquy interspersed with a voice over of his inner thoughts and demons.

The echoes of betrayal and bewilderment that consent was neither asked for nor given would resonate with any man or woman who had endured a similar experience, and it was obvious by the audience’s hush that they were willing to take this painful journey with him.

The central story however focuses on the ongoing deep effects when consent is not respected or given. The disturbing revelations, the detailed account of dehumanisation show that our society still rejects a complex expression of gender.

The betrayal by friends and the ongoing trauma, internal torment and self-doubt were covered expressively, leaving the audience entranced if a little awkward at this invitation to glance through a window into this deeply personal account of sexual assault by a person known. And still a friend.

This is an intense piece of theatre that explores an issue of male on male abuse – an issue that can be sidelined as society grapples with gender, its expression, its acceptance, trust and consent in the 21 st century. We have made progress however as Brodie explores, the fallout from abuse is intense and shows we still have a long to go.