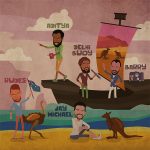 Comedy is generally a subjective thing, especially stand up. In a show like Boats and Bogans, audiences should expect a lot of racially-based humour and much “punching down” on the bogan front. And although that is the main fare, there were plenty of surprises in this mixed banquet, including a pappadam!

The nights’ MC is Rudes, a tattoo-covered gay man whose shtick is based on shock value. He not only loves having male genitalia in his mouth, he loves inserting it into his act. From exploring orifices to sharing a bed with his mum during his “coming of age” period, this RAW Comedy finalist had the job of warming the crowd and introducing each act, with or without expected intro music!

The opener was Jay Michael. Jay shares the shock approach to comedy, the more he can surprise us with a gross idea, the better; typically involving sex or bodily functions. He also honed in on the bogan aspect of the night with swoops at targets like Davoron Park. But amid all this, he also delivered some clever lines (his LAN joke was one) and some thoughtful items (the police horse incident springs to mind).

Delhi Boy was the first of the sub-continent representatives, opening with some self-deprecating material comparing the plight of “brown” men competing against pet dogs when vying for attention from “white” girls. Delhi Boy’s comedy explores and contrasts social norms in Australia (at work and on TV) with Indian culture. His take on the similarities between MAFS and arranged marriages was particularly noteworthy.

Barry Gilman has a shorter, more staccato style of delivery, relying on his Scottish lilt to soften the blows of his deliberately over-the-top style of vulgarity. Susan Boyle remains in his repertoire as an easy target along with Melbournians (and that was a great way to bond the SA audience), as Barry worked through a range of topics from coping with eating Maccas to learning intimate, baby girl nappy-changing techniques from his partner.

The final act was Aditya Gautam, another Indian comic, who has developed a reputation in the comedy scene for his pappadam routine. He shared that story, which highlights the ignorance of racists who taunted him with the term “curry” to which he was enraged enough to demand “what curry”. Much of Aditya’s work pushes at the boundaries of what is racist and what is not, repeatedly reminding us that our laughter is a mirror on our own thoughts.

Overall, this show is a representative slice of the comedy acts you see in the regular Adelaide circuit, with Rhino Room open mic nights on Mondays and Cranker Comedy’s curated nights on Tuesdays. The styles are all different and the comedic ideas are varied.

If you’re curious about tasting some raw, Adelaide stand up, Boats and Bogans makes for a good appetizer but don’t forget the pappadam.