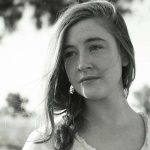 Amid all the official Adelaide Fringe acts within Gluttony, there are a number of informal shows available for your pleasure as you wander or stagger between bars.

One such venue is The Runaway Theatre, run by Imaan Hadchiti.

This tiny caravan-based theatre seats about 15 and it was full the night we saw Biddy O’Loughlin do a 20-minute, one-woman show for $10 a head.

Biddy is the daughter of Australian comedy legend Fiona O’Loughlin and in her set, the fearless daughter does send a few barbs her mum’s way, before suggesting we see Fiona’s show so her mum can buy her some shoes.

Biddy’s act is traditional stand up comedy with a range of set ups and punchlines delivered as she interacts with her audience.

There are some biting lines in her repertoire, which gives her comedy some extra edge.

Topics covered include love, sex, Alice Springs, and observations of the world and people around her.

What is a wildcard is her inclusion of a love song, well, a sad love song.

Biddy’s voice is sublime and her song was beautifully composed.

Discoveries of shows like this provide the memories that keep people coming back to the Fringe, no matter how huge and commercialised it becomes.