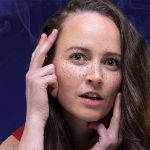 An Evening with Zoë Coombs Marr is an ethereal experience.

There are strands of stand up, strands of musical interaction, and, possibly, mystical strands of spooky symbolism interwoven together into a deliberately awkward mix of comedy and criticism.

Zoë has an established schtick that involves naming the comedic conventions she’s using. For example, she engages as audience member in some banter and then turns to the audience and says, there, that’s crowd work done. She also promises her mark that he/she will have a “callback” later, which is where comedians make a reference to something that happened earlier in the show.

This approach sometimes comes across as self-deprecating but also has tinges of “too cool for school”, maintaining a little distance between her and her work which can be a uncomfortable at times because as an audience we sense our performer is holding back from us, at least just a little.

That said, Zoë’s observational stand up often hits the mark, especially her routine about straight people in which she talks about straight culture as a twist on how her beloved gay culture is often talked about and patronised. There is some great material here. Likewise, her calling out of the many male comedians who just revisit dick jokes and complain about not getting enough sex at home in their acts, is spot on and an important message to the comedy world.

There is also some “slow burn” material in the show in which Zoë departs from stand up and explores interaction with music and, spoiler alert, a live choir. It added an extra dimension to the show and, as Zoë commented aloud a number of times, the integration is not fully working yet but there is certainly scope for this to be played with in the future.

The mysterious strand is a reference to Zoë’s dance performance to Chandelier by Sia. It is the closing act of the show and will remain a highlight for many as she surprises us with a range of talents not even hinted at in the publicity blurb. And either the Grant Burge wine had played with my mind or there was a stroke of genius in ending with Sia’s song because it became for me a physical and aural rendering of the evening’s journey:

Indeed, did this show exist, did this audience exist? Zoë has brought a body of existing work to the cabaret festival and blended it with some faff and flourish, and as she notes, we, her audience whom she views as one person who returns night after night, will be back again tomorrow night to watch this all again, remembering nothing of the night before.

For the record, the night did exist, there were many rounds of hearty laughter, and Zoë must surely have felt love from her audience as we physically supported her in her trust exercises performed from the edge of the stage. And as we departed, the thought lingered that we never got as close to her as some other heart-on-their-sleeves performers at this festival. Maybe Zoë is the comic sister of Sia: two respected performers who maintain a mysterious distance from their adoring fans?

An evening to ponder, indeed.