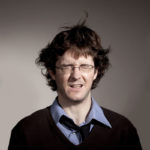 Rob’s own blurb about his show, signalled a warning: Rob Hunter (writer ‘Rosehaven’, ‘Spicks & Specks’, ‘Get Krack!n’, ‘You’re Skitting Me’, ‘Late O’clock’) presents a brand new bunch of oddball stand-up and sketches in a show guaranteed to be enjoyed by some! Feel free to see something else though.

For me this was the first show I’d seen this Fringe that had a pre-recorded character to compliment to comedian. When this character first interjected it was surprising and I honestly thought this initial gag would soon end and we’d be into Rob on his own. Well, one hour later the novelty had truly worn off, there was simply too much pre-recorded material and the type of humour in many cases was crude and simplistic. However, some of the crowd did enjoy it
but this reviewer sadly did not.

The basic premise, on the off chance I totally misunderstood the show was that of a down and out comedian moving through a series of gigs that generally didn’t end well. From a school career day, post season footy club, feminist debate the narrator flatmate seemed to be on the money. There is some sort of weird irony here because in the same way the plot device was about an unfunny political incorrect comedian, in some way it could have been a documentary about the previous night.

To top it all off there was pretty bad noise bleed from another show for a while.

Towards the end Rob did a much longer stringer of non-interrupted work which was a breath of fresh air and hinted that the voice over might simply be in his head but by then it was barely enough to save the show.