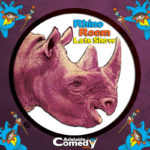 If you want to get a sampler of the best comedy shows for the Fringe you would be hard pressed to go past the Rhino Room Late Show.

With a surprise MC of Hans, for over two hours of hilarious comedy we seemed to have picked a pretty good night.

First up was Nurse Georgie Carroll who gave us a taste of her own show with some genuinely funny and original stories concerning medical procedures which were not for the faint hearted. She was also memorable for suggesting that Manchester is basically Whyalla without sunshine.

Mick Molloy had a go but surprisingly the crowd got the better of him when he drifted into AFL territory crowing about last year’s Richmond win and  requiring Hans to rescue him.

James Smith followed with a laid back, quiet but hilarious observation of dating apps, supporting your friends getting married and why punching above your weight is an aspirational goal for many.

Imaan Hadchiti gave us a taste of his show with tales of sex parties in Berlin (Hans was nodding in a knowing way) and self-depreciating humour of his stature.

Lawrence Mooney followed with the astute observation that married with kids is basically a hostage situation and a hysterical depiction of “Dog Style” sex, as opposed to “Doggie Style” which is much less funny. Cramping legs and goldfish will never be the same.

Darren Sanders talked of cruise ships and mermaids and why men might be tempted to drive into trees and the evening was finished off with Lindsay Webb and joys of joint accounts and some truly excellent tips for shopping in these tough economic times.