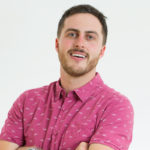 Well, at least that’s where he starts.

As he strips away the veneer of success, he takes us on a vicious roasting of himself and his Gen Y cohorts.

Marriage and relationships get put under the microscope.

He also concedes that we need to do unfulfilling jobs to fund what fulfills us, whether it’s working in a call centre or even being a social worker (as one audience member admitted).

There are some poignant moments along the way, including a glimpse into what the world would be like if nobody was prepared to do “mundane” jobs (like most of his generation, he says).

One example is a concert with heaps of bands wanting to play but nobody available to sell tickets, manage security, etc.

There are some hearty laughs in this, along with some barbs poked at most of our blind spots.

This show is definitely “good enough” for you to see this Fringe!

PS And thanks for your defence of Adelaide’s honour when mates give you grief in Melbourne. Every little bit counts!