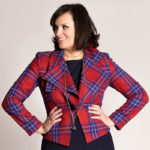 Reading this review, and sharing it, is a feminst act. Really, it is!

There is much to like about The Guilty Feminist podcast and stage show. I think it is the self-deprecation, self-forgiveness, and honesty in the DNA of the enterprise, as espoused by its creator, Deborah Frances-White, “I’m a feminist, but I detagged myself from a picture at a women’s conference where we were all standing in front of a sign which said ‘Empowered Not Coward’, because my ankles looked fat … [it’s] a supportive forum to discuss the big topics all 21st century feminists agree on, whilst confessing our “buts” – the insecurities, hypocrisies and fears that undermine our lofty principles.”

If all movements could achieve this balancing act of striving for lofty goals while being kind to one’s own missteps and fears, they would endure with very little risk of corruption and splinter groups.

Watching this live podcast recording gave me a sense of deja vu because it shared many similarities with other single-interest, preaching-to-the-choir podcasts I listen to in the realms of skeptisim, atheism, and politics, namely, the comfort and joy of being in the company of the IN group. And we need these experiences because they bring succour to the soul and they give us a safe space in which we can express ourselves without needing to watch our Ps and Qs for a few moments.

Of course, within groups that believe they are fighting to right wrongs, extra licence exists to be a little lax with stereotypes about “the other”. Perhaps this is why we had to endure an opening 20 minutes of “dumb husband” repartee between Deborah and her co-pilot, Claire Hooper.

Thankfully, though, once we’d emerged from that section of the show, we were witness to some well-crafted, role model-worthy banter about women and money.

Claire Hooper’s poignant set piece on the topic, followed by a deliciously rambling finance quiz (involving Deborah putting her husband and podcast editor on speaker phone to answer questions about his attitudes to family finances), delivered some very helpful insights and some very important “me too” confessions about how many of us are “optimistic idiots” when it comes to thinking about money.

For example, one key question Claire asked was, how much money should you be aiming to have before you retire?

Neither Deborah, her husband, this reviewer, nor many in the audience had an answer to that one. And that was the point of the exercise. Deborah and Claire shone a spotlight on our blindspots and in this case the stakes are higher for women because they pointed to statistics showing women are more likely than men to wind up homeless upon retirement.

The guest on the show was comedy star, Tessa Waters, who we wished had been brought on stage earlier. Tessa has an enigmatic stage presence and was simply delightful as she matched Deborah and Claire in her earnest engagement with the topics at hand.

Tessa was able to throw open the curtains on the plight of the carny. She described how she faces not only the challenges that all travelling performers face, of living from week to week as she takes her shows around the world, but also faces the disadvantage of needing to deal with chromosone-based obstacles when it comes to negotiations with producers.

Through these disarmingly eloquent performers, this show brought into focus the level of entrenched wrongness in the practices and institutions of our society and underlined the need for agitators to keep pushing humankind to hasten its progress as it gradually inches along the pathway to enlightenment.

The Guilty Feminist Fringe show was a satisfying event to attend and I can understand why Deborah Frances-White described it to a “male” as football for feminists. However, church for feminists might have been a better descriptor, in the good, old evangelical style in which charismatic pastors preach to a fervent audience ready to whoop and applaude their heroes.

And, just like an old time pastor at a rally, Deborah used her position to urge women to see other female shows, like Tessa’s, to support women in developing nations through microfinancing (like we do at The Adelaide Show Podcast), and to support Louise Beamont (stage name, Louise Reay) who is being sued by her estranged husband to stop one of her stand-up shows, all in the name of being feminist acts.

Sitting in the historical Royalty Theatre, built in 1929 (34 years after women got the vote in South Australia, 11 years after women with property got the vote in the UK), we witnessed yet another new chapter of our history being written, one in which a new cohort of humans is organising to exercise power and influence over society and I hope this lot will show us how it can be done with equality and fairness for all.