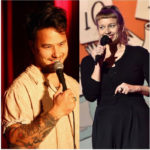 This was exactly the sort of show I had been waiting for. Nicholas Huntley and Carla Wills totally nailed it with a mix of dry wit, cutting observation and the meaning of life. Hint, it’s to do with stardust.

Nick started the evening with observations of some hilarious aspects of why our government’s great idea of the basics card might not be so great in the hands of drug addicts. Ever wanted to know why science won’t get you laid or sexual favours? Come right along. Why the Lion King is the best dating movie? Would drunk monkeys make it better? Well, that’s not answered in the show but the drunk monkeys are. Nicholas keeps the show moving along nicely with plenty of local references and a cornucopia of laughs.

Carla now lives in Melbourne. We won’t that against her as she grew up local, we’ll just say she’s visiting … Mexico. The deadpan, self-deprecating humour went down a treat as she covered her religious upbringing and life as a horrible teenager. This gives a good backdrop to a strong level of wit and sarcasm. Carla shows a slight amount of restraint as a feminist which is nicely complemented as being pretty dam smart and holding a simmering boil of pacing, leaving you concerned it might all explode however she continues with thoughtful humour which had the laughing all the way through her show.