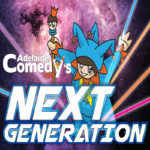 In spite of many years of support for local comedy. this will be the last year you’ll be able to catch home-grown comedy here so get some up ya dog before the dozers move in.

Geoff did a fine job emceeing the event, giving us a taste of four local comedians.

This is a rotating line up and a full house was entertained by new comedians Court, Nina, Tony and Carla.

Court started the proceedings with self-deprecating stories from travels, the entertainment industry and life.

Nina followed with office observations, Australiana-themed sex, and a theory of teeth. Take away coffee will never be the same.

Tony was up next and ripped straight into his very mixed blood heritage with no pretence of political correctness. Not that the other were PC in the slightest however Tony took this to a very amusing edge.

Carla was up next with more witty life observations and like the others, put on an entertaining show.

Overall I was impressed with the quality of these genuinely funny comedians and it was great to see them early in their careers.