A promenade of shorts A Promenade Of Shorts 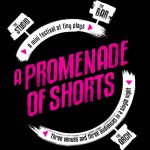 A Promenade Of Shorts is a quirky night of plays, perfectly curated to ease us back into theatre-going mode again.

Under the auspices of Red Phoenix Theatre and the watchful eye of Michael Eustice and Libby Drake, Holden Street Theatres is currently home to a short season of short plays.

There are nine plays in all, broken into three sets of three, with each set being performed in one of the three spaces at Holden Street.

Audiences “promenade” from one set to the next, throughout the evening.

The beauty of this format is twofold:

Words That Matter is an interesting concept in which we hear three popular speeches being delivered at the same time, in the same space, by Martin Luther King (Stephen Tongun), Robert Kennedy (Anthony Vawser), and Julia Gillard (Sharon Malujlo). The performance is punctuated by moments during which we only hear one speaker at a time. This contrast heightens the sense of cacophony that engulfs the rest of the piece. Intriguingly, this signals to us that there are likely to be “words that matter” being spoken right now albeit being drowned out in the din of social media chatter, Netflix, and grubby tabloid sensationalism being peddled by the likes of Rupert Murdoch’s hirelings.

Up Close and Personal is a two-hander set at a singles night. Frankie (Kyla Booth) is a sassy regular who boasts to the fish-out-of-water first-timer, Roz (Petra Schulenburg) that this is the best singles night, so good she’s been coming for three years. The pathos underlying that utterance engenders some empathy for the character; empathy that gradually erodes as Roz reveals the reason she has attended the night. This is a lovely study in transitions in status between characters. Similarly, there are shifts in mood and tone that are quite engaging. One forgets there are other singles drinking and chatting in the pub, as our focus is drawn into the icy drama unfolding around this one small table.

Attack of the Killer Banana Spider is a short, revue-style and Pythonesque-style light relief in which two college room mates, Josh (Joshua Coldwell) and Sol (James Fazzalari), discover a venomous spider in a bunch of bananas they’ve brought home. It’s played for laughs and as such only has two gears; exposition and manic shouting. There are some running gags strung throughout this short piece and it’s likely there would be even more comedic fruit to uncover with a little extra modulation in pace and delivery.

In Electric Roses, we explore the fallout of a domestic violence event, set in southern USA. Russ (Brant Eustice) is the perpetrator who retells his side of the story, with a deep, southern drawl that lurches from happy-go-lucky good time boy to menacingly violent and confused malefactor. As much as Eustice holds our attention with his simmeringly volatile stage presence (yes, I know simmeringly is not a word), the character of Russ is repulsive and our empathy is directed toward Sara (Lyn Wilson) who is sporting a black eye and is waiting for a bus to take her away from her town and the danger of Russ. Well-meaning but impotent intermediary, Darrell (John Rosen) offers whimpering support to Sara’s escape, served with a side order of guilt. “You leaving will kill him”, offers Darrell, as the audience winces. This is a slow burn and a testament to the format of the evening in which scenarios are set and played with aplomb.

Intermission sees more American accents at a Broadway premiere. Amid gossip surrounding a writer (Fahad Farooque) and his off stage romantic choices, the action pivots around an extended scene with the writer and a Young Woman (Kate van der Horst). It’s a beautiful passage of writing as the Young Woman gradually realises she’s talking to The Writer. Van der Horst’s poise, timing, and delivery is well worthy of a Broadway opening, itself. Meanwhile, in a beautiful irony, the writer’s anxiety about whether his play’s jokes are landing is juxtaposed against the script of Intermission, which contains some deft and masterful punchlines that rarely raised a titter from the audience on opening night. The result was a taut, intriguing experience.

Driving Mr Diddy is another comedic piece to refresh our palates, with retirees Margaret (Joanne St Clair) and Brian (Brian Godfrey) off on a drive to a line dancing class, when they’re carjacked by getaway bandit, Darren P Diddy (Nick Fagan). Fagan’s British crim accent is endearing and a welcome relief from the American accents in this set of plays. However, the memorable elements are the moments when Margaret drifts into “mum” role and Darren slips into “son” role, amid smattering of dad jokes and elderly eccentricities delivered by the wistfully enjoyable Brian Godfrey.

Of all the pieces using American accents on the night, The Book Of Leviticus Show, is the one where this artistic decision sat most comfortably. While the other plays could have easily adapted to Australian contexts, this one has homegrown, ignorant USA baked into its DNA. The premise is that Lettie Lu (Ruby Faith) a trailer park character and her husband (Jamie Wright) have been given a timeslot to broadcast a TV show to their community TV station, live from their living room. Lettie decided to make a show in which she enacts the punishments demanded by god in the Bible upon sinners from her hicksville town. And thus, we are informed that a gay man and an adulteress are to be murdered on live TV in the name of the lord. This play makes the skin crawl because the delusion is surely real in many parts of the impoverished and under-literate world, southern USA included. In a Trumpian USA, this could happen. As it turns out, this is a warm up for what is about to be served last.

Another comedic palate cleanser is served next. Auto Incorrect is a delightful bit of fun in which a computer programmer (Tim Williams) is on a first date with an old high school flame (Anita Zamberlan Canala). The trouble is, he has become so immersed in a new auto correct program that his brain tries to guess and auto correct his utterances in the real world. Williams plays this role in an hilarious and charming manner, and even though we get the gist quicky and know what’s coming, it is simply a divinely joyful amusement and a worthy component of the promenade program.

The last piece in the set at The Arch is Loyalties. It’s an interesting production. The actors play in natural, Australian accents but early on we get a sense of European-style, heavy writing, where heady ideas and idealism clash, at once hollow and jingoistic while also being deep and earnest. Slowly, deliberately, many strands of discussion unfold between the four characters, Rudy (Tom Filsell), an enlisted soldier and patriot, his partner, Monika (Laura Antoniazzi), her sister, Katrin (Jasmine Leech), and her partner, Jacob (Tom Tassone), a poet. While much tension arises between Rudy’s “love” of country and Jacob’s dismissive preference for self-actualisation, focus soon shifts to tension between Monika and her sister when Katrin criticises Rudy for his violent flare up against Jacob. There are further strands of loyalty explored by this young cast that clings tightly to Murphy Guyer’s Eurail-like express train of carriages dense with ideas and principles.

The satisfying thing about A Promenade Of Shorts is that there are many twists, some great moments and performances, and enough variety to meet the needs of most theatre-hungry audiences.