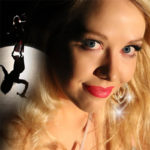 This review might seem a little OTT but that’s because I have a massive case of pianist envy.

Samantha Riley, who was born over the border in Mildura in the most outrageous of circumstances, now calls South Australia home and she’s blessed us with the premiere of her hilarious cabaret comedy show, A Little Bit EXTRA.

Samantha has trodden the boards in a number of the biggest musicals to tour Australia, including Annie The Musical and The Addams Family.

In this show, however, she weaves songs from musicals and pop culture in between self-deprecating anecdotes that range from chuckleworthy to LOL.

While Samantha’s voice has Broadway panache and power, her presence is down-to-earth, polished Fringe.

When Samantha is in full flight with her accomplished pianist and “best friend”, Isaac Mouskovias, A Little Bit EXTRA has you hoping that tomorrow is more than a day away and that the final curtain has gone missing.

If you enjoy musicals, you’ll not only get introduced to the five styles of musical acting, you’ll get treated to a songbook of sultry, sassy, and sometimes salacious songs.

This season is TOO short and this reviewer DEMANDS A Little Bit EXTRA!