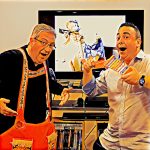 Don’t let anybody tell you that audiences have their own personalities.

Last night’s audience at 2 Cats On A Hot Fringe Roof was another large gathering of strangers seeing the same show as previous groups had but was quieter.

However, what was most satisfying was how that quietness was related to thoughtful engagement.

There were early signs this heightened engagement was going to be the case because two attendees brought a homemade placard saying, “naughty corner”. That level of preparation was unprecedented in this run of 2 Cats On A Hot Fringe Roof.

A number of elements got hearty applause which had previously only yielded laughter; a sign of an audience taking its job seriously.

As an interesting side note, last night’s audience also contained the youngest member yet. Young Harry attended and he is about five months old and quietly absorbed the atmosphere and finished the night with a beaming smile and wide eyes hungry for more.

And, of course, it would be a shame not to mention the audience’s superb Mr Squiggle efforts. Bravo. #5stars for the #2CatsOnAHotFringeRoof audience from night five. FINAL SHOW tonight #Adelaide. If you like your @ADLfringe to drip with #fun #nostalgia from #SouthAustralia you'll want #tickets to this #comedy now! https://t.co/rENQQQ1yHp #2catsfringe