2 Cats Drove Into The Cuckoo’s Nest

2 Cats Drove Into The Cuckoo's Nest 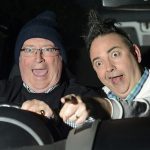 2 Cats Drove into the Cuckoo’s Nest is Steve Davis and Ralf Hadzic’s sequel to their show last year, 2 Cats on A Hot Fringe Roof, and this time its all about celebrities.

Light up shoes, 11 different types of tissues, and terrible travel companions are just some of the many topics featured in the duo’s new show. With a recent trip to America together, and Ralf’s unofficial title of Adelaide’s chauffeur to the stars, they have many stories about celebrities and the life of the rich and famous under their belts. Put all of that together and you get one hour of a hilarious tag teaming comedy show all about what makes a celebrity.

In an interesting twist, the two use vlog style videos to accentuate their tales and include multiple interviews with some of Australia’s classic celebrities, such as the amazing Anne “Willsy” Wills.

The Historian Hotel provided a great setting, allowing for Steve and Ralf’s big personalities to fill the small intimate room.

The two create a contrasting dynamic, their relationship on stage being like a rivalry between your two funny uncles trying to outdo each other. Generation Z may have some difficulty with their references, but you can bring your parents along for a great night out.

While the show did have an unpractised air, this was their first of many, so quality can only go up from here.

Steve and Ralf have also included a fun competition for attendees, to come up with the ridiculous request your celebrity rider would have, funniest responses win some wine.