Out and about with lightpainting at Langhorne Creek

The message came through from my comrade in arms and photography lightpainter, Andrew.

Was I interested in a photography competition down at Langhorne Creek? Well yes I thought, it’s far enough away from the city to avoid the light pollution. The orange glow of city lights might not normally be noticeable but once you have an exposure for anything up to 5 minutes it’s a problem.

Langhorne Creek is a nice small town with not too many streetlights, it hasn’t been urbanised with “country style living” suburbia.

With luck we’d get a clear night so the Milky Way could be part of the shot.

We’d done a few shoots on the South Coast and knew the clear dark skies could give gorgeous photos.

The first stop was the old Bleasdale winery. Normally visited during the day when tasting, at night the brick tower stood starkly into the night sky.

We tried from one side and then the other, eventually choosing the western side view.

Using just a long exposure and a small but very bright torch to paint over areas we wanted lit we decided to go with something simple. 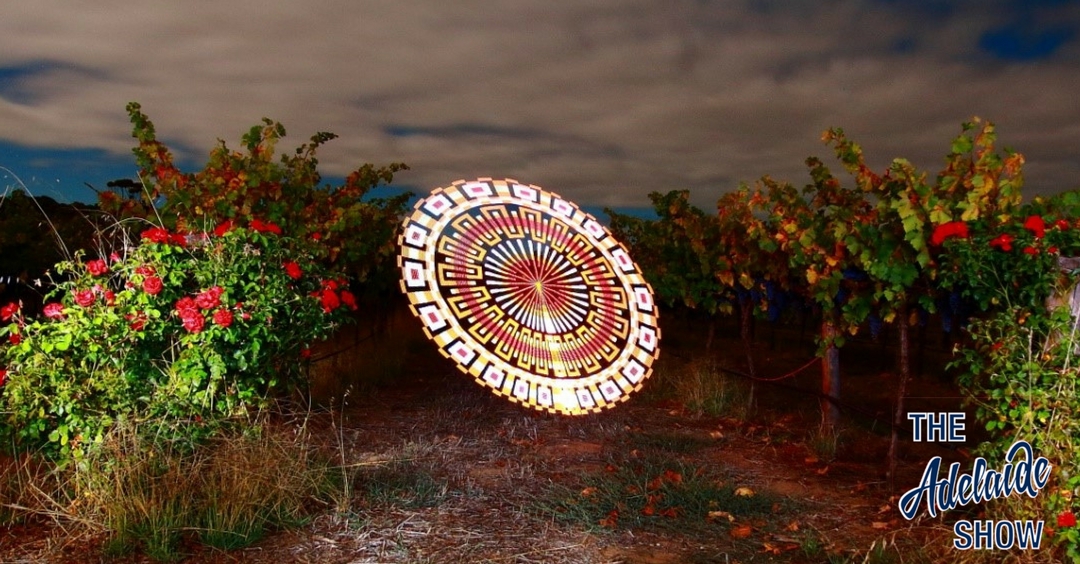 We then headed out to the west of the town in search of vines. Not that we really had to travel far, the area is full of vines.

Finding some close to road and timing the shots to between the infrequent cars we tries some simple lighting before trying out the new light painting tool, what we refer to as the ‘MegaWand’.

Computer controlled with 140 programmable LEDs and a couple of dozen patterns, we had recently added to new circular patters to its repertoire of effects from image painting, icon painting, color floods and a plethora of other light effects.

As per usual we had to work out the settings for the overall scene and then work out exactly how to paint in the effect.

One item we wanted to capture was the vivid deep purple of berries, soon to be picked for the next vintage.

The result is shown above, straight out of camera, single exposure.

Although these days it is standard practice to use post production involving Photoshop, in our photographs the only thing we adjust is the cropping and some basic lighting settings.

The sculpture in the dark And that was one night, basically a handful of photos from dozens of exposures. We headed home as it was a working day.

However we hadn’t gone far when we passed through the small park we had spotted earlier in the evening but not stopped at.

Even though it was now after midnight we did one shot of a sculpture in the park. The stark brightness of the carving contrasting nicely with the southern night sky.

By now the moon had risen and so captured one of the easier light painting shots, stars in an apparently daytime shot.

The return to the grapes And so about a week later we are back at Langhorne creek. There are less grapes on the vines and signs of leaves over the ground from the harvest.

We tried a few more shots however the cloud was starting to move in so we found a rather scenic road to try out some light painting techniques.

We had only been set up for a few minutes when the local restaurant owner drove by to see what we doing.

He had no problem with us being there, I’m guess the locals are used to people coming down at all hours of the night to photograph the natural beauty of the area.

An orb and some escaping ghosts The dark night and stark trees gave a nice backdrop for an orb and some escaping ghosts.

With some of the cloud clearing away we were yet again presented with a glorious night sky from a nearby field.

Using the brightest torch we had with us we could light up the distant trees and some of the ground and then capture the night sky.

It’s quite interesting to realise these sort of vistas can be seen every night it’s not cloudy from this lovely area of South Australia. Looking out to the east, the other end of the Milk Way was visible and so it was time to perfect our UFO image.

We had some practice the week before however this time we wanted to work on the light under it. And because we wanted to remove any star trail effect we had to work quickly, we had 30 seconds to complete the photo.

With the shot we were after we were ready to head home.

We didn’t win the competition, however the area around Langhorne Creek gave enough opportunities to really think we won anyway.