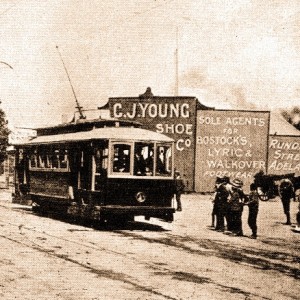 Long before the popularity of travelling by motor car, Adelaide had a wonderful and quite extensive network of trams. Lines linked the CBD with just about everywhere across the metropolitan area.

In 1878 Adelaide was the first Australian city to introduce horse-drawn trams (and was the last to cast them aside for more up-to-date modes of public transport).

Adelaide to Kensington services were first, followed by Adelaide to North Adelaide.  Subsequent years saw the creation of lines from Adelaide to the suburbs of Mitcham, Hindmarsh, Walkerville, Burnside, Prospect, Nailsworth, Enfield and Maylands. In addition, a closed line ran from Port Adelaide to Albert Park, as well as one joining Glenelg and Brighton.

To accommodate the tram lines, some Adelaide streets required widening – Brougham Place in North Adelaide was increased in width by around 3 metres in today’s measurement system, and Prospect Road was widened to a total of 18 metres).

Most streets were left unsealed, allowing the horses’ urine to be absorbed into the soil, while the soft, dusty surface also allowed for good traction for their hooves. There were problems with this, however, as the unsealed roads became quagmires in winter, and dust was a great issue in the summertime. Another problem was the 4.5kg of manure deposited by the horses each day!

An ambitious demonstration of battery power in 1889 saw Adelaide’s first experiment with electric-powered trams. Unfortunately the trial was unsuccessful due to the low capacity of the battery… not to mention the promoters’ deaths in a level-crossing accident shortly afterwards!

By the turn of the 20th century, horse-drawn trams had reached their potential and were starting to lose their appeal with the public. With significant increases in population, these trams were finally deemed inadequate for public transport requirements – they were becoming unable to cope with passenger loads, and by nature were very slow. 1909 saw the launch of Adelaide’s electric tram services, although because of the time required to electrify the whole network, the Municipal Tramways Trust continued to run horse-drawn trams until 1914.

Electricity for the new, extended tram network was supplied by the Electric Lighting and Supply Co. There were two converter stations in operation – one on East Terrace in the city, and the other at Thebarton. As variable electricity loads were placed on the system, very high capacity lead-acid batteries were installed (the one at East Terrace comprised 293 cells and a 50-ton tank of sulphuric acid).

Innovation and evolution of the system continued, and trolley buses came next. Trials started during the 1930s, when expansion of the tram network was restricted by limited funds as a result of the Great Depression.

Although useful, trolley buses and electric trams gradually made way for motor-driven buses, until finally the last electric tram ran on 12 July 1963 – leaving Adelaide with the solitary Glenelg tramline. Interestingly, the Adelaide-Glenelg line was originally a privately-owned railway line. By 1927 it had been bought by the South Australian Railways and transferred to the Municipal Tranways Trust. The line was then converted to a tramway by late 1929, and is still in operation today.

In the late 2000s, the Glenelg tramline was extended from Victoria Square to North Terrace (and since, out along Port Road to the Entertainment Centre at Hindmarsh). There are plans (money allowing, of course) to extend the tramway further to Port Adelaide, Semaphore, Woodville and West Lakes.