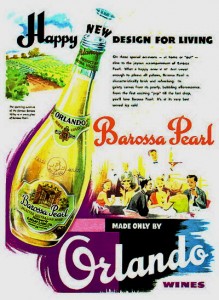 Do you remember Barossa Pearl – the sweet, semi-sparkling wine favourite of the 1950s, 60s and 70s?

We discuss it in episode 32 of the show.

Barossa Pearl was introduced by South Australia’s Orlando Wines in 1956 by company director Colin Gramp, and went on to become a national favourite.

The ‘frizzante’ wine style was introduced locally by Colin Gramp when he utilised a similar process of fermenting grapes in high-pressure vessels.

The result was Barossa Pearl, and the new style of wine won over just about everyone – from beer drinkers to port and sherry tipplers.

Will the Pearl return?

With declining sales during the 1970s, Barossa Pearl lost its place on the shelves.

However, some 40 years later, there is now consideration by Orlando’s current owners (Pernod Ricard) to reinstate the once-loved wine.

The move, they say, is being led by increasing demand for similar styles of wine, such as Moscato.

So, keep your eyes on the shelves in your local liquor store and at the bar of your favourite hotel, as Barossa Pearl looks forward to its reintroduction and a new lease of life. 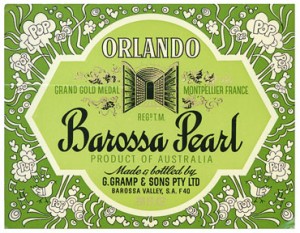 Wytt Morro (1922-2012) was the Adelaide man responsible for the label designs for Barossa Pearl and many, many others.

He created the all-text label for Stonyfell’s Metala brand, innovated wrap-around labels for Wolf Blass, and introduced the idea of the same design for a brand but with colour coding of labels to denote varieties.

His designs were very ornate and were often hand-sketched works of art.