In episode 023, we had three cases and much debate.

@MartinCairnsSQL
First up, Martin from the UK was caught sending this tweet to a colleague in Adelaide:
@rob_farley Diffords Guide cocktail magazine has a article about Australia’s most boring city 😉 http://bit.ly/1mS2IjA
The Council decided that despite Martin’s ‘boring’ dig, he had no case to answer. Meanwhile, the Diffords Guide article was so good, fair and balanced, the Council decided to award them, @diffordsguide, and writer Theodora Sutcliffe aka @escapeartistes, Adelaide Visas.

@XxDholland
Dear Holland was found in conversation with Astro Ginger. Dear Holland lives in Millicent and tweeted this to her friend in Adelaide:
@Astro_Ginger you should go on more holidays and drop by ✌️ haha how can Adelaide get boring?
The Council awared Dear Holland an Adelaide Visa for this optimism. However, Astro Ginger’s reply got her placed onto our Watch List. We shall be following up:
@XxDholland it’s boring and there’s nothing to do except nap and read so that’s basically my life

@umttoy
Finally, Rob Lenz from Perth was caught, all guns blazing, getting stuck into Adelaide during the Australia Day cricket match at Adelaide Oval:
#AUSvENG are Australia being complacent?This game is as boring as Adelaide! Brayshaw you a truly are a knob oh ok I get it you are adelonian
Co-Councillor Steve followed up to see if Rob had had a bad experience, to learn that he really just likes getting stuck into Adelaide. He claimed his only highlight of the trip was seeing plane fire training at Adelaide Airport – he shared a picture, below.
@BoringAdelaide #Adelaide here vey exciting 2C when yr about 2board the plane they put on a gr8 show felt safe not!! pic.twitter.com/juP2pXieys
The Council decided that Rob was not just being tongue-in-cheek but had really just written Adelaide off in his mind. Therefore, his Adelaide Visa was rejected. As always, the door is left ajar, should he wish to redeem himself 😉 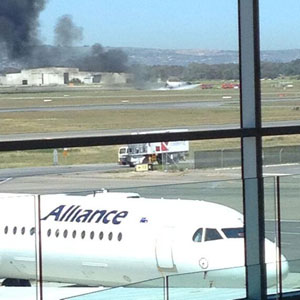