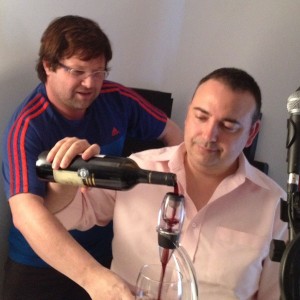 We had a double treat on Episode 014 when Frank Nardone dropped off some of his 2011 Nardone Baker McLaren Vale Shiraz.

That was the first treat, the second was the fact that we ran it through the wine aerator Frank had previously given Steve Davis as an experiment to see what impact bottle-to-the-glass-aeration actually has on a wine. And, as pictured, Colin found it hard to wait patiently for Steve to finish pouring.

Nardone Baker Wines is a South Australian, family-owned wine company that has won popular support in China, the USA, and Europe. Contact them for local availability.

Steve knows Frank Nardone personally and was quick to point out the fruit-forward nature of this premium wine.

The aerator did its work too.

In a side-by-side tasting, the boys were amazed at how settled and open the wine seemed after pouring through the aerator.

The un-aerated wine still showed the potential but would have needed a good half an hour to an hour to open up.

This wine is perfect for sipping on its own but its soft tannins really make it easy to pair with a variety of dishes, from Asian cuisine to roasts to pasta.

A most obliging wine.