Portrait of a Narcissist

Portrait of a Narcissist 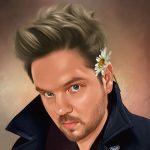 Nick Stevens has finally embraced his narcissism and re-created and rebranded his comedy act as Portrait of a Narcissist.

There is a sense of Stevens finding his comedic spiritual centredness with this show. His classic material which pushed the boundaries of common sensibilities in previous shows, is now given context and licence to thrive in all its dark and biting glory.

Stevens also uses a range of different comedy styles and delivery set ups, much like he must do when commanding his paints and brushes when creating his sublime art, which adorns the wall of Narcissism behind the stage.

In fact, within the context of narcissism, Stevens’ schtick now presents as clever vitriol, as he slings barbs and arrows at family members, Ararat residents, and even his co-star, Rick Carter.

Carter’s opening stand up has been written by Stevens, so the story goes, enabling the comedian to claim government support for helping out an elderly performer with cancer.

And Carter holds his own. The oldest Make-A-Wish kid in the world delivers some clever punchlines that warm up the crowd.

This is an evening of good, traditional, gritty stand-up, complete with all those rough edges and moments of random audience interaction that keep everybody alert and prepared for surprises.